What will the future hold for IoT ecosystems?  Some say that, in time, the Internet of Things will become the Internet of Everything.  Others say we are approaching that already with the convergence of IoT technologies, AI, Distributed Ledger Technologies, communications and big data analytics.

And when we get there?  IoT stakeholders who control the higher data layers of an IoT ecosystem will have an intrinsic advantage, because that is where insights lie.[1]  Using such data, they will be able to implement entirely new business models, such as dynamic data bundling horizontally across sectors (not just vertically within a sector),[2] raising the prospect of an entirely new order of insights.

We can therefore expect to see:

Evolution of IoT and customer relationship 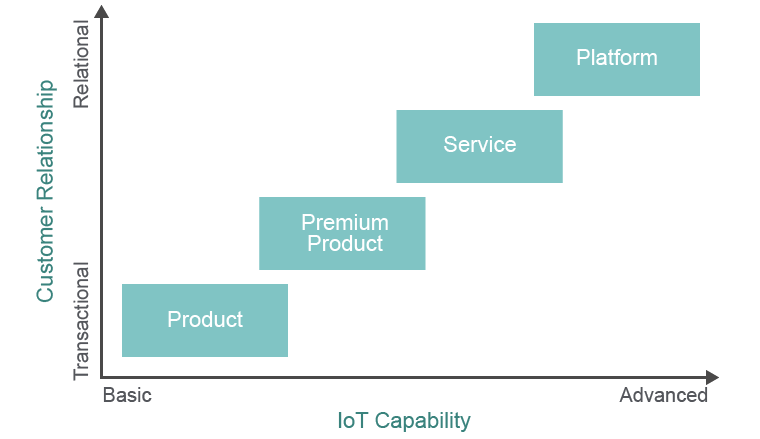 Source:  attributed to PwC US by the European Commission in Executive Summary, Cross-Cutting Business Models for IoT, 2017

As already described (see Liability), an IoT ecosystem is typically made up of disparate component elements not supplied in accordance with the requirements of a single end-to-end specification.  There will be both operational problems and legal consequences for some IoT stakeholders (and their customers) that flow from this.  This may lead to market demand for the role of systems integrator.

For example, a car manufacturer will be expected to ensure that its various IoT-enabled systems (braking, tyres, steering etc) work on an end-to-end and integrated basis.  It will increasingly become a systems integrator.[3]  This effect will be magnified when IoT is combined with other systems, such as autonomous driving and AI.

How will these industry developments interact with regulatory policy?  Regulators may feel the need to intervene higher up the IoT supply chain.  For example, car manufacturers typically struggle to get their system component providers to guarantee long software maintenance periods or to permit the car manufacturer to maintain the software itself.[4]  The result is that a car manufacturer may struggle to create an integrated vehicular IoT ecosystem.  Such an outcome:

As many of the problems (operational and legal) stem from an absence of IoT end-to-end integration, regulators may (particularly in relation to areas of public health and safety, and consumer protection) increasingly insist upon end-to-end certification of IoT systems. It is reasonable to suppose that much of the regulatory focus in relation to health and safety and consumer protection will be sectoral in nature.[5]

It will not be enough to certify components; we will have to test, certify and monitor whole systems. Eireann Leverett, Richard Clayton and Ross Anderson, Standardisation and Certification of the “Internet of Things”,  22 May 2017, page 19

IoT technology is highly disruptive to existing markets and business models.  IoT stakeholders need to prepare for situations in which regulation itself may disrupt their own hard-won new business models.  To do that, they need to factor legal and regulatory risk in at the design stage, lest the disruptors themselves become the disrupted.